Wind in the Willows

It's raining and we're watching Wind in the Willows episodes.  It's like Downtown Abbey for kids. But with claymation rats and moles instead of servants in full get-up. 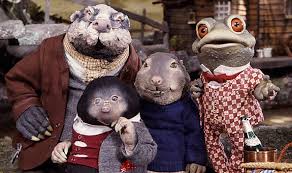 The costumes and sets are so good!

Violet requested Cream of Wheat, Piper wanted blueberries, so we mixed them.  I could live on breakfast porridge.

I like how the episodes start with an illustrated image like you're being read to from a book.  Now I wish it was autumn.