Our poor drywall guy fell off a ladder yesterday!  He busted up his head on the concrete floor and cracked some ribs.  We're so relieved he's not more injured.  I mean, this is bad, but it could have been a lot worse. 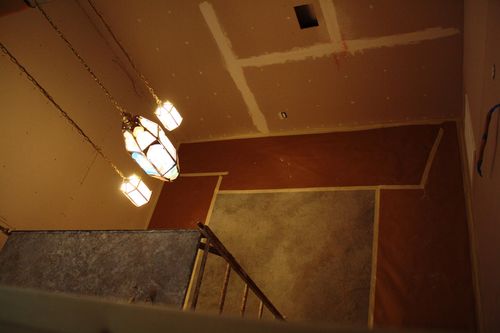 He fell from a long way up.  He was on a ladder that reached to the top of this wall.  We also have a scaffold, but the ladder had to scoot under an AC duct.

A friend of mine from college is a theater tech guy, and he took a really bad fall off a ladder recently, too.  My dad broke his thumb falling off a ladder, and I've heard of multiple people who have DIED falling off ladders. 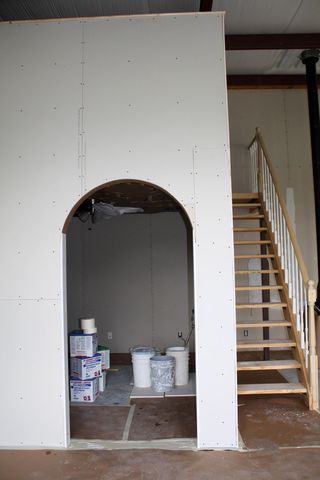 So...now I'm petrified of painting my studio.  The walls are pretty tall. See the background, too?  High.  I'm not a fan of heights to begin with, and I would have to be up on ladders about like this: 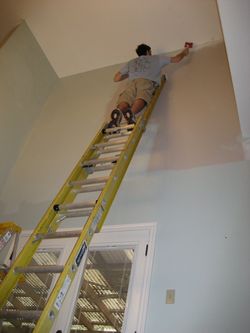 (from OurNestingGround@blogspot.com-This is some other person's house above, not my studio.) 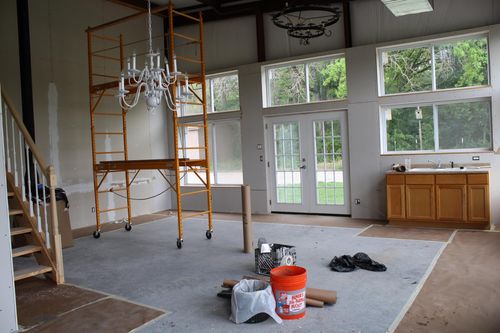 This is the main studio area.  I'm going to paint all of this white.  The portions above the window I'll just leave as insulation and exposed beams.  On the wall to the left, I'll be painting it all the way to the top. 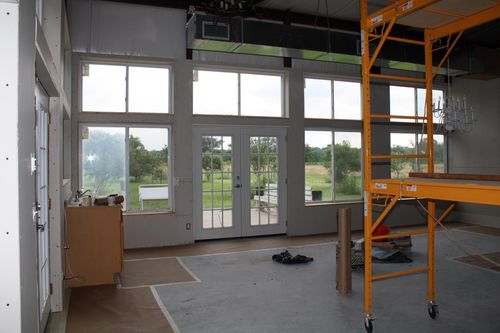 I taped off a perimeter around the walls on the floor, but I think I'm going to need to cover the whole surface.  I want to leave the floors as bare concrete, and they're going to spray the drywall texture.  I don't want to get it on the floors.  I doubt it will stain, but I'd rather not have to scrub it off. 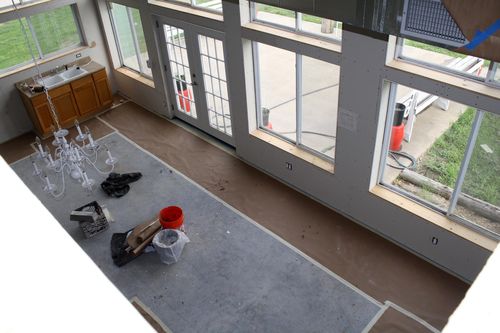 Here's a view from the loft. 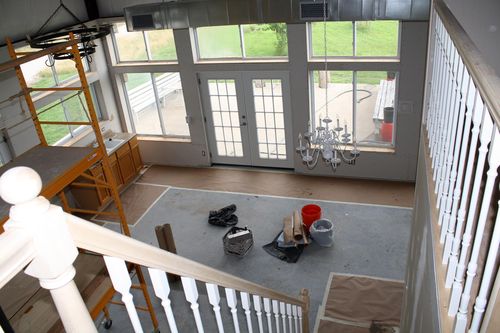 Pretend you're walking down the stairs. Then pretend you're standing on a shaky ladder with a dripping paint roller in your hand.  Go on, pretend.  Doesn't that look too high up to be painting from a ladder?  I'm picky about paint finishes, so I want to do it myself.  Grrr.  Why can't I train a squirrel or something?

Posted at 11:23 AM in Home/Decorating, Projects | Permalink

Your studio is outrageous goodness beyond words. I would just want to live in there.

No wonder you are itching like mad to get in there, it's like a dream dream dream.

Poor Pooor man Laura. Lovee just fractured one rib once, and could not move or breathe or get up and down alone. Just horrible. Head and ribs, I thought about him several times last night. I hope he is okay.

Go do a sage dance or something in there, and please be careful yourself!!!!

Laura.....I'm with V.....you should move into your art space! It is absolutely gorgeous.

Hopefully, no more bad ju ju will happen ~ your drywall guy must have 9 lives.....

I know it's been a while since I've been in the studio but WOW...what a great job you guys have done!

Pooooor guy! I feel so bad for him. Can you imagine falling from that height?
I'm liking the white wall look. Yes? No?

That studio is looking GORGEOUS! I can't wait to see it finished!