I don't know how things are where you live, but here in Texas, we have snakes.  Lots and lots of snakes.  I don't mind the vast majority of them, but the venomous snakes terrify me.

My mother went to high school with Jackie Bibby, the world record holding rattlesnake handler.  In the video below, he is setting a world record for the most rattlesnakes piled on top of you while sitting in a bathtub.  Who knew that was a contest, huh?

They sometimes hold this contest near my tiny hometown.   It is a big deal out there.  Does that sound insane to you non-Texans?  Or do you have a local version of this sort of wackiness?  Like moose wrestling or badger baiting? 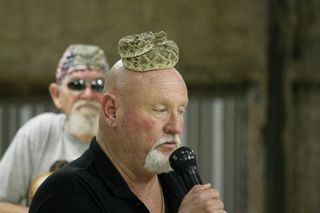 He lets them sit on his head. 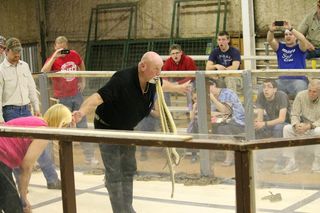 He puts them in his mouth.

Mr. Bibby received a severe bite just above the knee at a recent snake handling event.  He's been bitten a dozen times during his snake-handling career.  Unfortunately, this time, he was injected with a life-threatening amount of venom, and they will have to amputate his leg above the knee. Here is a link to his Facebook page if you'd like more info or want to donate to his medical fund.

Here's a typical rattlesnake encounter.   Oh, and by typical, I guess I mean where they are typically found. They are so well-camouflaged.  Isn't that scary?
Most people would get away from them, not chase them around.  I take that back.  About half the people I know would leave them alone. The other half---heck, other 75%---would try to kill them.  I'm not making a judgment call here, just giving you very unscientific statistics.

This video freaks me out.  It's a cottonmouth eating a rattlesnake.  We have more cottonmouths (also called water moccasins) than anything else.  They are scary, nasty, stinky, aggressive snakes.  I am more scared of cottonmouths than any other snake because of how they will actually chase you!  And they climb trees around water, which is so scary.  They will occasionally drop out of a tree onto someone's head or into a boat passing under branches.

Is this woman crazy?  Or drunk?  She repeatedly lets these snakes bite her.  None of these are venomous, but so what?  What if she grabbed one that was?  She's blindly sticking her hand in holes.  I couldn't even finish watching this. It made me cringe and wince and feel vaguely nauseated.  Seriously.

It's all fun and games and all, miracle, until the darn thing bites you and you are six feet under pushing daisies.

Wow, loved the video of Cooton Mouth vs Rattler! Reminds me of when we had a baby large mouth bass in our aquarium and the whole family watched it eat a goldfish that was its same size. Grody! What a nasty way to eat, it seems. The chick with the snakes was fascinating, although I disapprove of her snake catching & handling methods. It obviously works for her. But that is NOT how I was raised to do it! Kinda gross, that many of anything...

but do love the fashion statement of a coiled snake fascinator....

canada goose expedition But fans of "gossip girls"--Leighton Meester (queen B) and Blake Lively (queen S) must notice that their fashion icons are all crazy about UGG boots no matter it's in winter or summer..
If you are specially that person who takes things very seriously, you must not wait to start with writing one of the most important assignment. where to buy canada goose The power struggle of the working class has since grayed into the history books.
it just means you fit the standard that the fashion industry/ media are setting at the time! look at marilyn munroe- no model of todays standard but in my eyes far more beautiful and womanly and sexy than any model i seen. beats by dre outlet The 1960's was a revolutionary decade for fashion sparked by the younger generation setting trends for the first time in fashion history.
http://www.cheapbeatsbydre4s.com