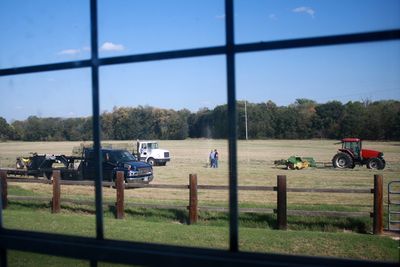 We've been harvesting our hay meadow for the last few days.  Adam came in and said, "One of the guys has his four year old daughter driving the big truck."
I was like, "WHAAAAT?"
Adam said, "Her dad says it's only a problem because it's an automatic. If it's his manual truck, he just idles it and lets her steer as it slowly rolls. The problem is she can't reach the pedals and steer."
My. Goodness.
They start 'em young in Texas, I tell you. 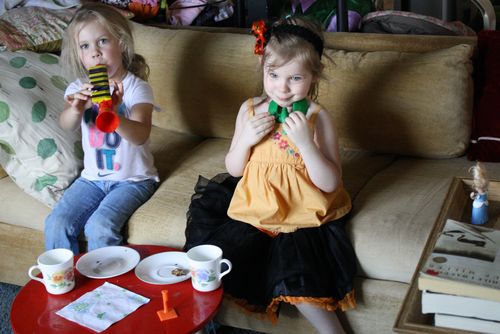 So I volunteered to drive the hay truck while the guys loaded up the hay.  The little girl and Violet had a grand old time riding in the backseat and playing.  Then the girls came inside to have cookies and milk and play. 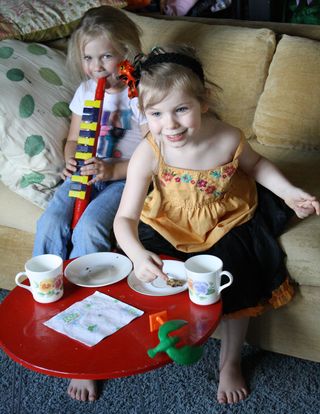 I'm afraid Violet thinks that harvesting hay conjures up a playmate from the meadow.  Like some sort of harvest sprite or something.  She's going to be really disappointed next time if no cute playmate appears.

Wow, I didn't know anyone did square bales anymore! My Dad had me driving a tractor (poppin-johnnie) at a younger age than that. It had a hand clutch and basically I only had to go in a straight line. We were hauling peanuts to a stationary thrasher in the late 40's or early 50's. I can still remember it!

Well I guess we've been remiss in Violets education.
Perhaps its time her grandfather, better known as Grump, taught her to drive a tractor.

I was horrified, but Lloyd did it younger? Wowza!

I wouldn't trust a 3 year old with a butter knife. Who knew?

Speaking of butter knives ;) I remember reading Jacques Pepin suggesting that all 7 year old French children should know how to cut up apples and make a tart! I think Americans are still brushing their children's teeth at that age and using antibacterial wipes on them at every moment.....but I would have to draw the line on driving the tractor at 4 years old.

The little girl is a cutie & probably appreciated a break from the fields (!)

Violet is super worldly if she knows Joanna Newsom lyrics (did she play her little harp too?) She could hold her own against an adult in New York City ~ I was in awe over your e-mail Laura! Where is that little girl's mother?

I'm still waiting for pics of you driving the truck wearing a cute little dress, high heels, and a fascinator! :)

Ok, Jill-
I suppose its time for Violets first tart lesson, then.