Circus Class for our Anniversary

I signed us up for circus class for our anniversary!  The Lone Star Circus offers classes in all sorts of things...juggling, trapeze, trampoline, contortion, lyra, and aerial silks. We decided on an intro to the aerial arts.

We celebrated late this year since Adam had to go out of town at the last minute.  He kept saying, "Happy anniversary...observed."

This is me on the aerial silks.  I learned to wrap my arms up in the fabric, flip myself upside down, and do a variety of beginner tricks.

This is Adam's first attempt to get on the trapeze.  He says, "I don't think my legs weigh enough to hold me horizontally." The moves require a lot of core body strength and balance.  I'd say it was a medium-hard workout.  It wasn't particularly cardiovascular, but you use a lot of different muscles in positions you've probably never been in before.  It was harder than yoga, but easier than....say, Olympic gymnastics.  Not like I've tried that. 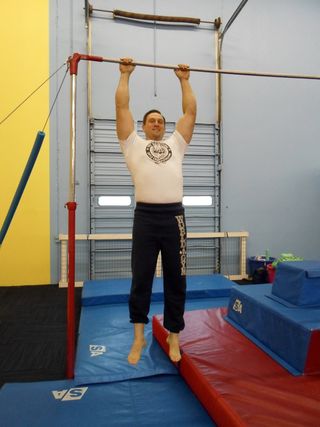 Adam's a lot stronger than I am, which helped with a lot of the activities.  My hands and arms were shaking by the end of the class.  I think I liked the aerial silks the best. 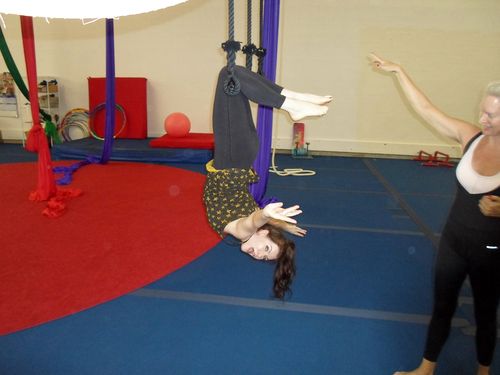 I was soooo sore the next two days!  I felt like my arms had been pulled out of their sockets. 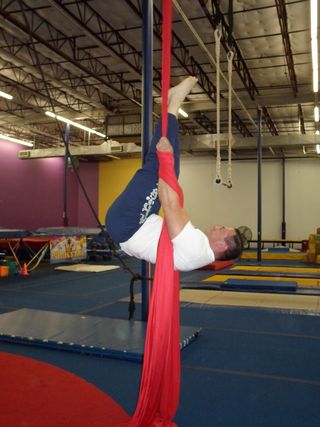 The classes are held in a huge training facility.  Most of the area is used for gymnastics training, and a small portion of the gym is used for circus classes.  It was fun to watch the gymnasts tumble and use the bars and balance beam. 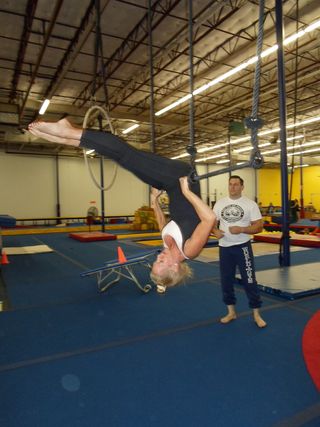 Our instructor was Stephanie Stewart. She was so strong and graceful and made everything look so easy! 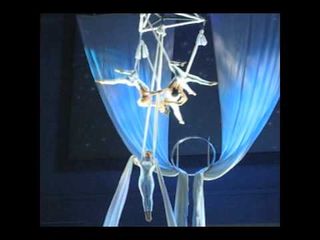 This is a photo from a recent performance-she's the one at the bottom.  She has performed with Cirque du Soleil and also worked in Las Vegas for 10 years. There's a neat article in D Magazine about Fanny Kerwich, the founder of Lone Star Circus. (That's her in all the red feathers.  Check out those arm muscles!)  She's an eighth-generation member of a French/Gypsy circus family...wow!  She met her husband while touring in Dallas with a circus.  He promised to build her a circus if she would stay in Texas with him, and that's how the Lone Star Circus was born.  Talk about an interesting love story!

Afterwards, we went to Queen of Sheba, an Ethiopian restaurant within a mile of Lone Star Circus. 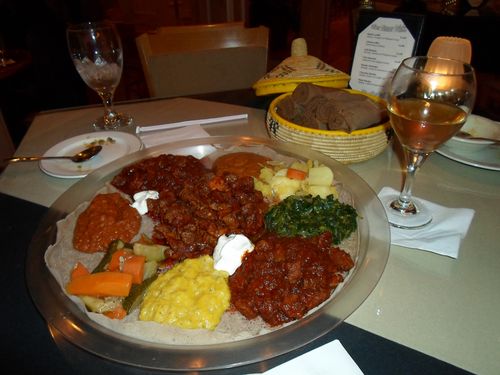 We'd never had Ethiopian food before.  You're supposed to eat the whole meal with your hands, scooping up the food with a spongy type of bread called injera.

Adam tried yebeg tibs, which is small chunks of lamb sautéed with onions and jalapeño in a spicy butter sauce.  I got tibse, chunks of beef in a spicy wine and butter sauce.  The meals are served with a variety of vegetables and lentils.  We also tried an Ethiopian honeyed wine called tej-it reminded us of mead, and was pretty strong.

It was a good experience.  The food was yummy and surprisingly tasty.  It was a fun anniversary 'observed'.  I'd highly recommend those circus classes if you're an adventurous sort.

Good heavens Laura, is there nothing you can't do! (especially after just having a baby not that long ago) It looked like you & Adam did really well, good for you! That was a neat way to celebrate your anniversary. I've never tried Ethiopian food, but hope to one day.

Hi Donna! Im not sure if I do that much really well, but I sure like to try lots of things.
If you like Middle Eastern food, I think youd like Ethiopian. They were vaguely similar.

You look great, my friend! You'd never know to look at you that you had a baby less than 6 months ago. How do you do it?

The article about Fanny & her husband was fabulous and makes you believe true love exists (they are complete & total opposites~ wow ~) If you are married to an engineer (Laura and me) it has it's challenges sometimes! But a circus performer to an attorney ~ I wonder how that goes?!

What a creative anniversary you planned Laura. Your husband will never be able to take you to a movie & dinner again!

Thanks, Maria!
I think breastfeeding helps more than anything.
Ive lost 40 pounds since Ive been pregnant.
Good GRIEF that was a lot of extra weight, but the doctor
wouldnt even let me take walks.
That class was soooo fun!
Im signing up for another one with friends this time.

You both make it look easy...HA! I would be afraid to even try. Awesome.