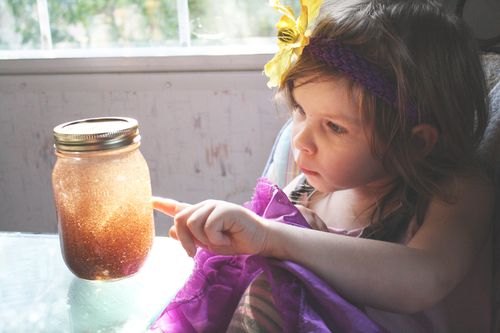 We made calm jars!  I've heard them called lots of things....glitter jars, sparkle vessels, fairy jars, time out shakers.  Basically, they're shimmery and fun to look at.

However....if you have young children, they can serve another purpose.  Around this age, kids can feel very out of control of their emotions.  It can sometimes help to shift their frustrated focus to something else.

So.....with our "Autumn Calm Jar", if Violet is feeling upset or out of sorts, we shake the jar.  I explained to her that our emotions are like that sometimes....swirling and swishing and bubbling around.  And sometimes, you just have to wait for that feeling to calm down.  So we watch the jar, in absolute silence, until the glitter settles to the bottom and the water clears.  By that time, she usually feels better again.  It's like an external, visual way to process those yucky feelings.  It seems to help her to know that those feelings will calm down if we acknowledge them, then give them some time to settle down.

If that fails, there's always running in circles, punching pillows, or time out. 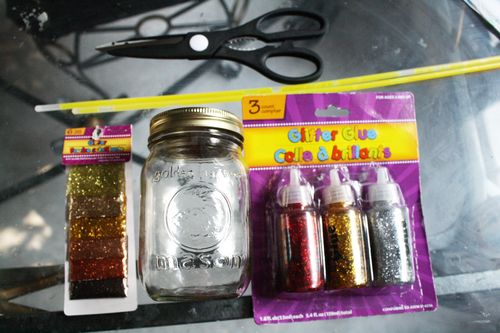 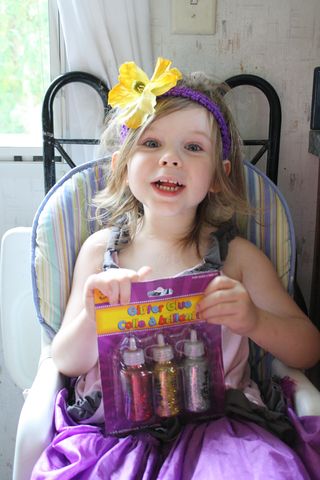 Pick your colors!  That's the fun part, according to Violet. 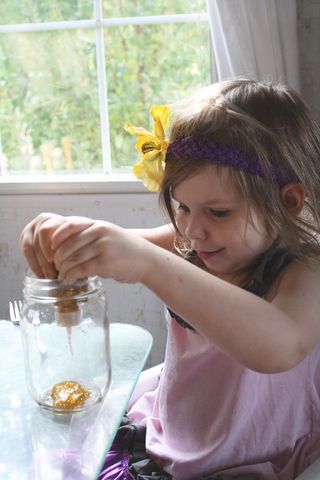 We poured half of a glitter glue tube in the jar.  Then, fill with a few inches of hot hot hot water -to break down the glue- and stir.  (Obviously, let a grown up do that part.  Sheesh--I hate giving obvious disclaimers, but we live in this weird Disclaimer World.) 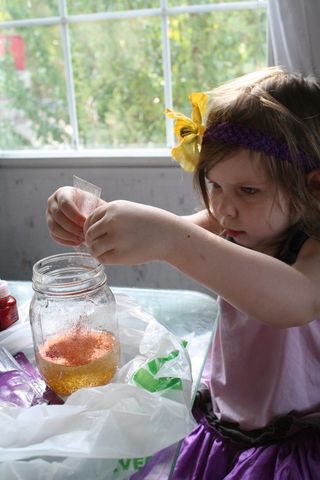 Pour in two or three of the little packs of glitter.  Glitter to taste, I say.  We chose fall colors. (We really should have done this outside.  Violet was suprisingly neat.  I'm not ever going to take that chance again, though. Adam has a near-phobic hatred of glitter.  One time, we went on a date, and I had on a dress with glitter in the fabric.  He spent all night being weird and scooting away from me and finally I said, "WHAT?  Do I stink?" And he explained how very much he loathes glitter, and how he was getting freaked out that I was leaving a trail of glitter behind me on everything I touched.  And there I was, thinking I was all sparkly and fairy like.  Guess I was wrong.)

Fill the rest of the way with hot water, then tightly seal the jar lid.  You can glue it shut if you want, but we just put it on really, really tight.  If you glue it---put some glue around the threads of the jar, then screw the lid on. 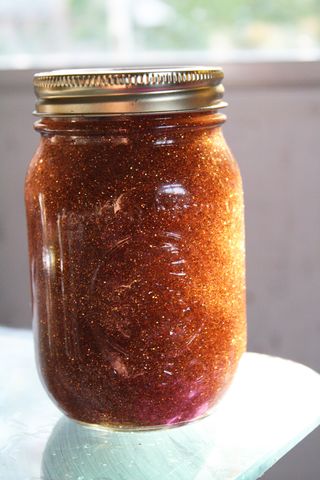 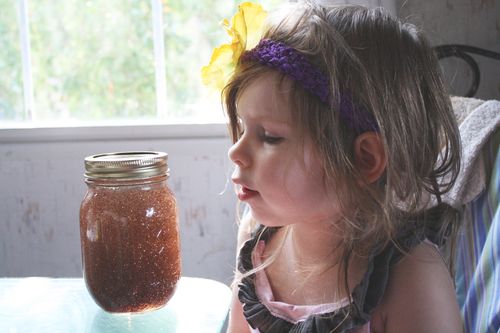 It's really peaceful to look at.  These would be great for holidays or seasonal jars, too.  I only let Violet use it at the table, when I'm the one shaking it.  If you let them have it, plastic would be the way to go, with a glued shut lid. 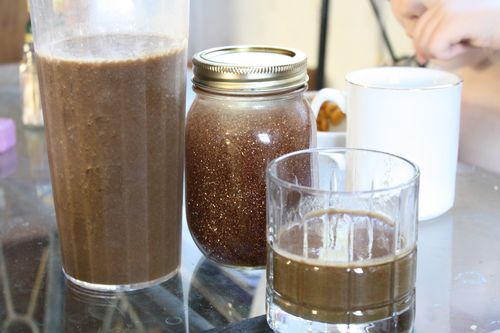 I also made some really, really ugly smoothies.  Now, if I said, "Hey, do you want a chocolate shake?"...they'd look fine.  But they're smoothies.  Don't they look positively stomach-turning?  They tasted okay, but man....so unattractive.  It was cucumber, carrot, peaches, apple, and purple cabbage.  Maybe not a repeater. 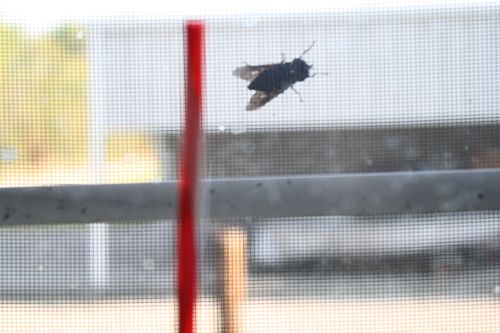 Get a load of this ginormous horse fly.  Biting, mean little suckers.  That's a straw on the left...for reference.  So you can understand their ridiculous hugeness.  They HURT.

This has nothing to do with anything, but I got a kick out of it.  They put radioactive material in the 'face dirt' to track how clean the cold creams get your face using a Giger counter.  I wonder if they REALLY did that???

OMG, such an eclectic post. I watched super nanny a few times and she is all about doing what you say. So painful making the transition, for both parent and child, but it worked. You are the best mom. I mean it. The idea of a calming jar is terrific. Letting violet make her jar, genius. On to the next thing...don't believe you've posted a pic of Piper for a couple days. Where is she ?!

Fits aren't pretty but that counting and threatening stuff is hilarious, especially when you see a mom in public counting to 3 ~ 10X over. Dads get results because their voices are deeper! Moms just sound worse than the kids whining.

I am going to make a glitter jar for my husband and one for myself. Off to our time outs and glitterize!

The videos are a scream.....Women Know Your Limits is another funny one.