I haven't posted any food things in a while, so here you go. 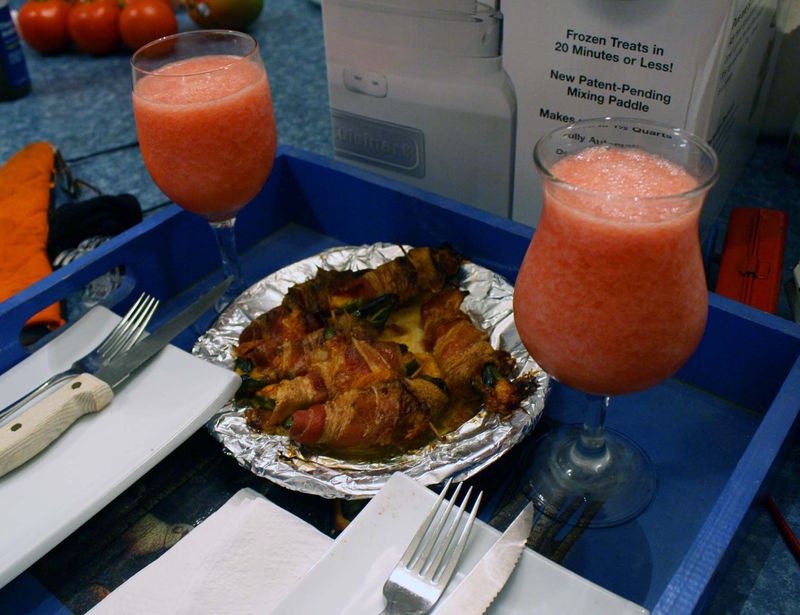 Appetizers on the porch:  watermelon slushies and jalapeno poppers

Poppers:  Cut the top off jalapenos (the same way you would with a green pepper) and remove the seeds and stem.  Fill with cheddar cheese, then wrap with bacon and secure with a toothpick.  Throw them on the grill or put them under the broiler until the bacon is done. 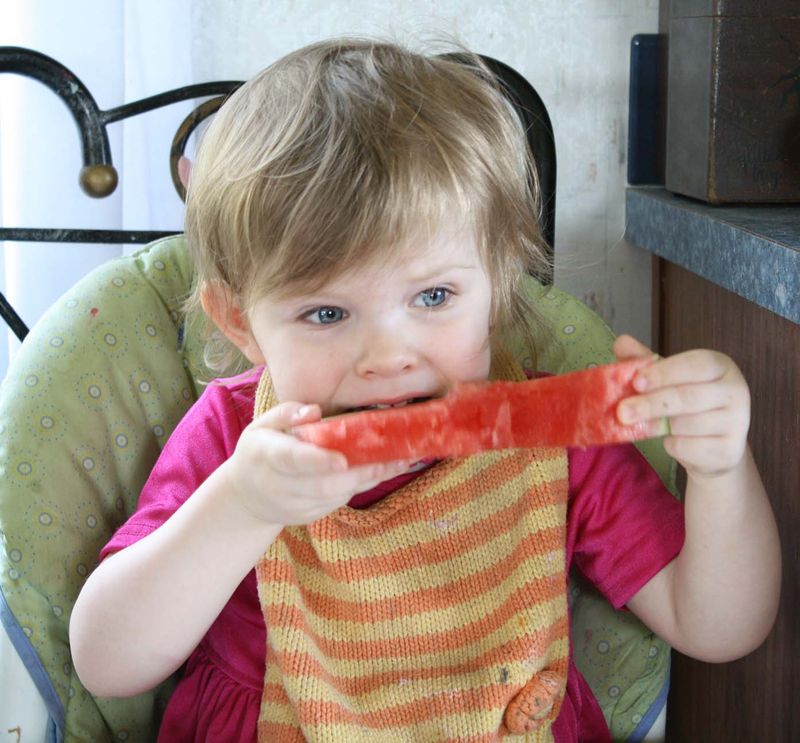 For some reason, Violet insisted on eating her watermelon backwards. 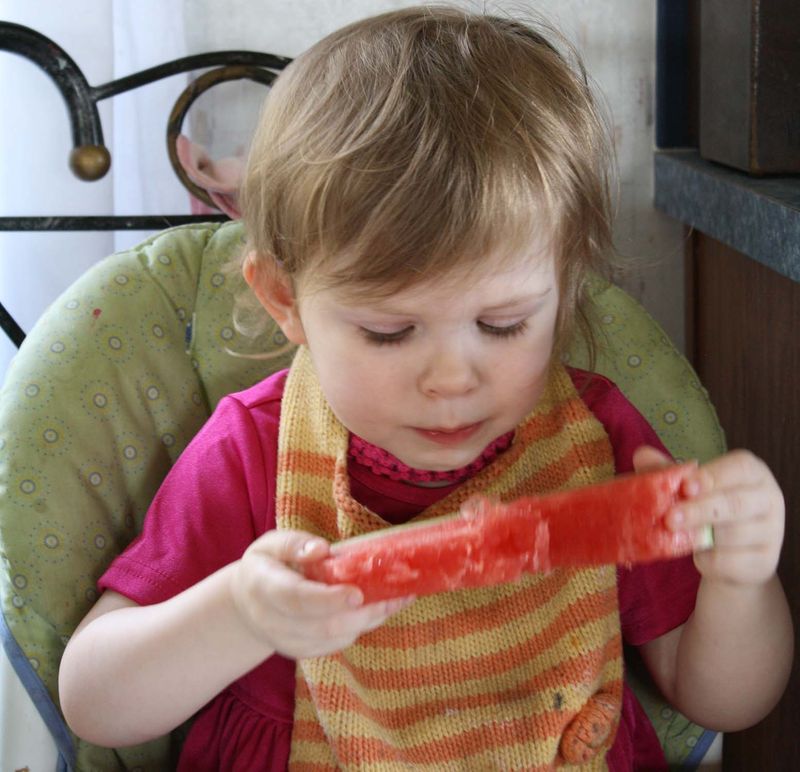 She'd nibble on the green part and say, "Watermelon celery." 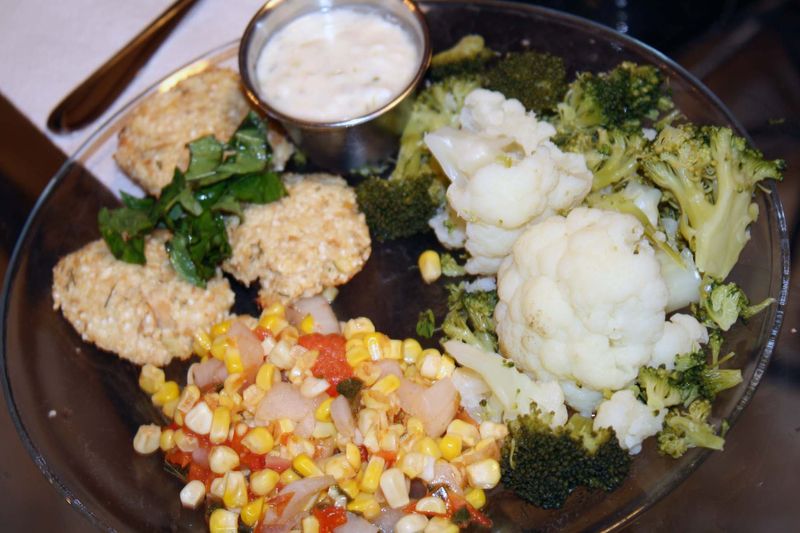 -Salmon cakes (I used this recipe from CanYouStayForDinner, but her recipe uses tuna.  I just substituted salmon.  Oh---and I didn't have any couscous on hand, so I used grits.) 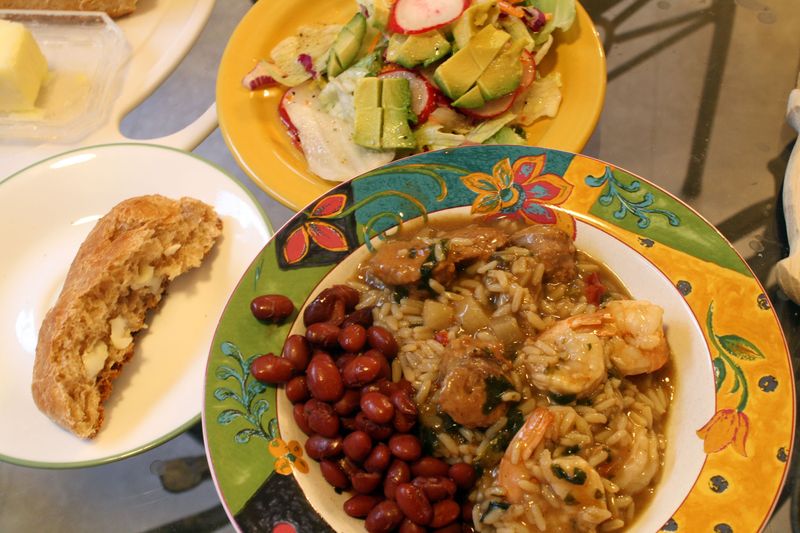 Boy, could I have crammed into more starch in to this meal?  Perhaps I should have thrown in a side of pasta.

Salad:  Combine iceburg and butterleaf lettuce with radishes and avocado.  I topped it with Ina Garten's buttermilk dressing.

Gumbo:  Oh, the shame!  I just used a box of Zatarain's gumbo mix and threw in cooked Cajun sausage and frozen shrimp at the end.  I also threw in a small box of frozen spinach for an extra nutritional boost.

Beans:  Just red beans---follow the directions on the bag, salt and pepper to taste, add a little veggie oil for smoother taste

Bread:  I tried this recipe in my bread machine.  I overcooked it, but butter can hide a multitude of sins. 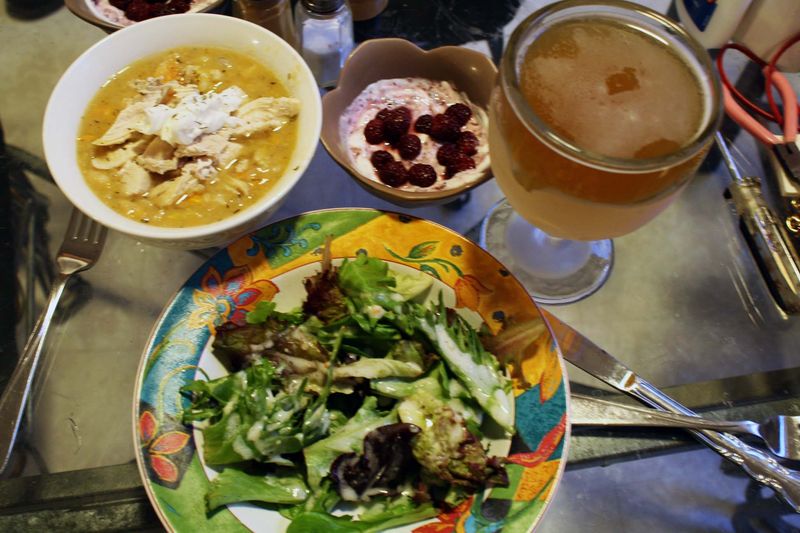 -White Bean Cassoulet from Cooking Light:  As usual, I made lots of substitutions.  I didn't have asparagus, so I used carrot. (Yeah, I know---really close veggie, huh?) I made it much brothier by doubling the water and adding extra chicken broth.  I was in the mood for more of a soup, and I pureed half of the soup for a thicker base.  I added chicken because my husband is allergic to vegetarian meals.

-Salad: Boring but tasty bag-o-salad with yummy Ceasar dressing from Le Madeleine's.  My friend Maclaine is a food honcho for Le Madeleine's, and brings me treats occasionally. 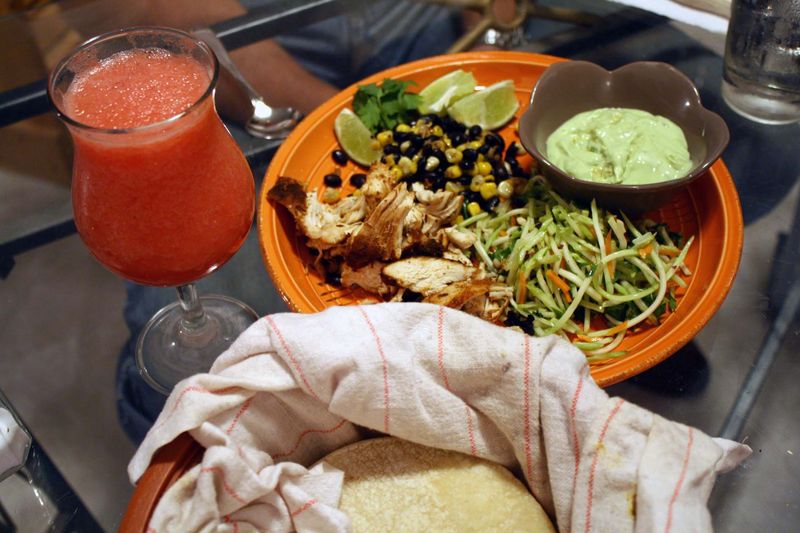 -Chicken Tacos:  I used this recipe from Cooking Light----yum!  We really liked it.  Adam didn't care for the Avocado Cream, but I could have eaten a whole bowl of it.  If you have any leftovers, here's what I did.....mix ANY leftovers (except the slushie) in a bowl with a bag of salad for a quick and healthy lunch.

-Black Bean & Corn Relish:  One cup black beans (make beans from dried, or rinse canned beans, cut kernels off 3 cobs corn (or use one can), slice 10 olives, mix with 1/8 cup veggie oil and 1/4 cup apple cider vinegar, salt & pepper, and I added a sprinkle of cumin, chile powder, and a dash of cinnamon

Yes, YUM! I have a watermelon on my porch that I am forthwith going to cube and freeze. You did mention adding vodka, didn't you? I love that you cook with so many veges and often with seafood, too. As for leaning on the occasional packaged "helper", oh yeah! I do it, too. There are good products out there. One of my favs is canned fire-roasted diced tomatoes (not the salsa type). And I don't cook beans anymore, I rise them and use canned. Thanks for sharing, hon. Off to the kitchen... Oh, and at last a pic of doll baby. Eating watermelon! I swoon.

And here I sit without one invitation to supper this week! Everything looks beyond scrumptious, Laura! Will be trying some of these out this week.