I don't particularly care for any sort of game show.  In fact, I'm one of the few crazy folks out there that doesn't have a working television.  Not even the basic networks.  I'm not, however, above renting a series or two from Netflix. (By the way, I sorely miss "Six Feet Under"...anyone else?)  My husband and I just can't have a tv in the house.  We sit in front of it and drool. 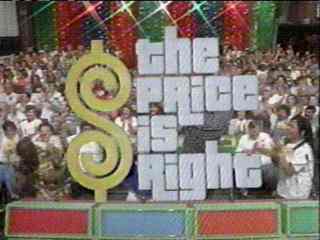 Does this show depress the heck out of anyone else?  It reminds me of being stuck at some baby sitter's house bored out of my skull.  The ancient baby sitter had a weird rule that the boys had to play outside and the girls got to (had to) stay inside.  I was the only girl, so I was stuck watching this crap and eating canned soup and grilled cheese sandwiches.  Just the sound of the theme music makes me want to crawl out of my skin. 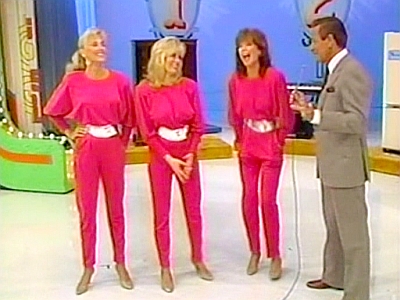 Those models were so goofy and skinny and ridiculous-looking.  They commited every fashion faux pas known to man during their tenure. 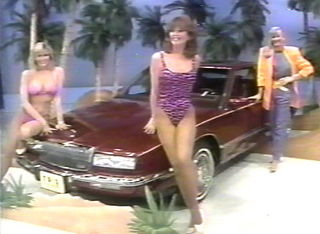 They were always prancing around in bathing suits on ugly cars or some ugly dinette set.  I swear the one in the middle is wearing pantyhose under her swimsuit. So tawdry. 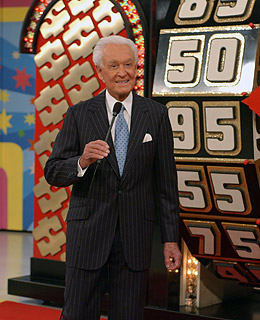 You've gotta love Bob Barker, though.  The only fun things on that show were Bob, the Big Wheel, and Plinko.

When I think of the Price Is Right, I think of my grandmother. I always associate that show with her, I'm not sure why. Maybe I watched it at her house when I was a little girl, my mom used to take my brother and me over there most mornings when we were very young.

Seriously, though, she popped into my head the minute I saw the pic of Bob Barker.

yes, me too, i associate the game shows with grandmother's house! i don't like game shows either. who wants to watch other people win money anyway?