Being on bed-rest, I suddenly have a lot of unexpected time on my hands.  Fortunately, I love to read.  Now...I have all that time I always wanted to lie around reading novels. 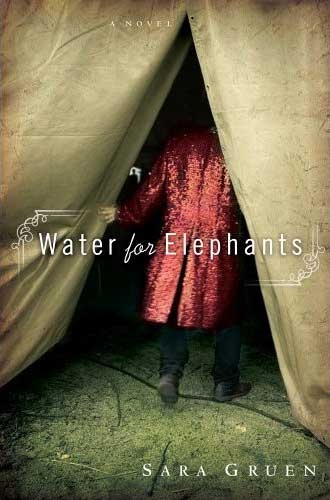 Has anyone else read "Water for Elephants" by Sara Gruen?  I thoroughly enjoyed it.  The novel reminded me a bit of the television series, "Carnivale", but it wasn't that dark.  Here is a description from Publisher's Weekly:

"With its spotlight on elephants, Gruen's romantic page-turner hinges on the human-animal bonds that drove her debut and its sequel (Riding Lessons and Flying Changes)—but without the mass appeal that horses hold. The novel, told in flashback by nonagenarian Jacob Jankowski, recounts the wild and wonderful period he spent with the Benzini Brothers Most Spectacular Show on Earth, a traveling circus he joined during the Great Depression. When 23-year-old Jankowski learns that his parents have been killed in a car crash, leaving him penniless, he drops out of Cornell veterinary school and parlays his expertise with animals into a job with the circus, where he cares for a menagerie of exotic creatures[...] He also falls in love with Marlena, one of the show's star performers—a romance complicated by Marlena's husband, the unbalanced, sadistic circus boss who beats both his wife and the animals Jankowski cares for. Despite her often clichéd prose and the predictability of the story's ending, Gruen skillfully humanizes the midgets, drunks, rubes and freaks who populate her book."

Does anyone have any book recommendations for me?

I've been meaning to read that book, it looked like something I'd like, but then I read about the animal beatings, and I was done. I've discovered that's my hard limit in written or filmed storytelling. Someone hurts an animal (even if it's in a book, even if it's integral to the plot), and I am DONE with it. It just makes me ill.

Books I adore include:
Anything by Robertson Davies, but especially the Salterton Trilogy. (He was a Canadian novelist. Brilliant writer. I mean, I'm sure he's still Canadian. He's just dead. Hence the "was".) Also, they're thick. So they take up a lot of time.

Anything by Barbara Pym. Her stories are about small lives, full of sly wit, and brilliant characterizations.

Also creepy, really creepy, The Circus of the Earth and Air by Brooke Stevens.

There are many, many more but this should get you started.

I own it. I am stuck on page 62 or so. I am enjoying it, and must make time to keep reading. It ha been on my shelf for over a year, bad on me!!
But, it is soooo funny in the beginning to me.. About aging and such...

Starting it up again today!! xo